Why my question is classified as off-topic and others are not?

So if I'm not wrong the moderators there simple have the power to close questions without a plausible explanation or before trying to understand better the OP question, so the statistics of this SE are not surprising at all. I suggest you to visit other SE Sites to see profissional examples of treating questions.

If a question has been put on hold or closed OP or any other person who thinks that he can re-write in a manner that would make it rather on-topic or lift the closure reason can easily edit the post. This is even explained and suggested in specific help site.

Consider editing the question or leaving comments for improvement if you believe the question can be reworded to fit within the scope.

Also note that complaining that you have been treated in unfair manner just read the comment (see here)left by Goldpseudo which is explaining why he decided to close it:

I'm closing this as opinion-based. It's entirely possible to read "signs" in anything, whether they're natural occurrences or not. There's no reason to believe this has any religious significance whatsoever. – goldPseudo♦ Jan 11 at 21:47

This is a typical procedure on any site in the SE network, if there are enough avid users a question that is off-topic or should be closed would be closed in less than 60 min. The OP always has the option to edit it and hope it would enter a re-open review queue and hopefully pass it. Sadly most of the users that have enough rep to do so don't even look at their review-queue and ignore this part of their "engagement" on the site. The picture below shows that around 10 users are the only "active" reviewers partly since last November: 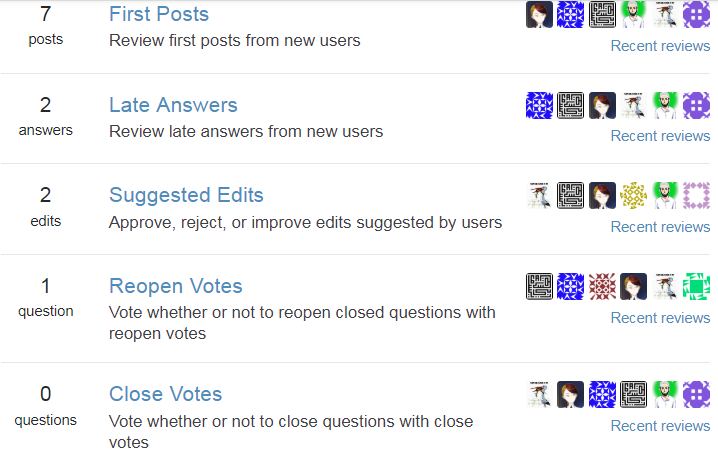 Why did the other question get an answer

As to why: first let's check your question:

Today, January, 11, 2019, a swarm of locusts has descended on Mecca, prompting a large-scale cleaning operation. Has it is explained here.

(...) their invasive descent upon Mecca was migration-related.

Even if it was natural, my first reaction to this was "God is Great", it's a sign from Him. I searched about this, and my conclusion was that its a thing that's not a normal thing there ... I assume that is a clear sign that something its wrong.

How can this be explained? Another sign (of the end of times)?

EQ: Can this be related to the new (not so modest) Mecca project?

I would like to know if any Islamic source can provide a religious answer to why this occurred .

I know some can found this a little bit off-topic, but since was at the hearth of Islam, I assume that it's purely related to Allah, and a sign, but I would like to know more Islamic info if possible.

P.s. If it's a normal occurrence I'll delete my question.

Ok the question was asked on a site about Islam. But there's no single question about Islam in this post you ask about signs? Signs of what? Who should interpret this signs and why? Why should a religious source give an answer? And what is your interpretation of a "religious source"? all these open questions lead to at least two closure reasons: "unclear what you are asking", "primary opinion-based" and "off-topic" and even "too broad" may come to mind.

Now to the question you claim has been treated more fairly:

Can we buy new clothes things for unborn baby ,during 8th month of pregnancy ? Many people tell it is not good to do like that is it true according to Islam ?

Certainly the first question (part) is off-topic, but the second (part) asks whether this is true according to Islam and that's clearly on topic, as we are here to show what is part of the teaching of Islam and what is not read in the on-topic page :

Islam Stack Exchange is for experts in Islam, students of knowledge, and those interested in Islam on an academic level. For the purposes of this site, "Islam" includes all groups that identify themselves as Muslim; do expect to see answers from multiple points of view unless a certain perspective is explicitly requested in the question.

Respect other people's beliefs, and don't get into arguments about whether any particular group is "right" or "wrong"; we are all here to learn together.

Any questions on the subject of Islam are welcome here, including but not limited to Islamic law and theology, the Islamic texts, or classical Arabic as it pertains to understanding the above.

Who defined "Signs" as a religious word? Signs are only part of what Allah tells us about them or they are quoted in another related context else signs is a somewhat broad and unclear term that is not necessarily religious, as to the other questions you claim have been answered while suing it:

Not the answer you're looking for? Browse other questions tagged discussion specific-question closed-questions .

8
Read this before declaring "it's not fair"