Were these comments deleted inappropriately?

I am raising this issue of double standards on behalf of a moderator by the name goldPseudo. Though I know he is very active and does this site a fair share of favour. However, I strongly believe there must be some regulations put in place on things that he does. Because as obvious this is not the first time he is abusing his power.

So, the case is as follows (from the question "can recitation of the quran (ruqya) be used to heal physical ailments?"): 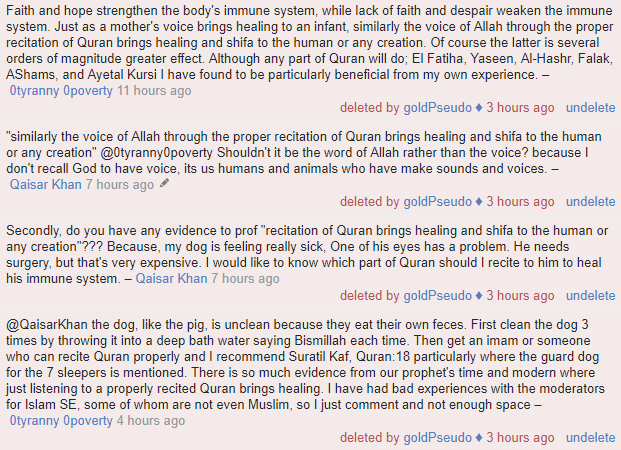 I got engaged with a person in a constructive criticism in the comment section. I was trying to indirectly make a point by raising an issue which was related to what that person had just suggested in one of his comments. He believed reciting Quran to a person or creature with weak immune system heals and makes the immune system stronger. He implied that Quranic recitation could be used and can essentially replace medicinal therapies. I asked him to provide a proof. That's where he was about to get busted. But presumably the same belief is also shared by this so called moderator by the name goldPsuedo. Realising I am about to conclude a point which goldPsuedo doesn't agree with. He came in and intervened. saying "Comments are not for answers". He deleted all of our comments.

I replied, by saying there are a tone of people who have used comments section and used it to provide answers and gave him an example of such question. I asked him why does he turn a blind eye on those users?. I basically tried to constructively criticise him. He again turned a blind eye and said "Comments are intended for constructive criticism":

Let me clarify what's going on here, the reality is that the point I was about to prove didn't inclined with the belief of this moderator and that's why he did not allow me to conclude something that is not well received by most of the religious fanatics, extremists, terrorists and fundamentalists. I think he himself is one of them because his attitude is not neutral. If someone posts a credible question or comment that has the potential to criticise muslims or make Islam look bad, instead of clarifying it, this person abuses his power to suppress that embarrassment. I think he should be regulated and if he refuses to act neutral, he should be striped of his privileges. This person also has a reputation to become personal with users like me who take things a little far. I know for sure, that once I post this question. He may try to abuse his power even then by having me banned one way or another. I may not be around to use this site for long. However, I warn him to refrain from such practice. Because in the end he is going to dishonor himself by indulging in such shameful practice.

Ok, so the core problem is that the moderator removed some comments and didn't remove other comments, right? After initially asking the question, you edited in:

and we don't want any Hitler, Stalin or a crack-head dictator to control this site.

I do agree those people (especially the dead ones) would make poor moderators. But what does that have to do with deleting comments?

For context, we've seen sectarianism threaten the site since the very beginning. I've been very concerned that the volunteer moderators maintain a level of neutrality when they take actions on the site. Without wise and level-headed moderation, this site seems doomed to fall into unending conflict until it is closed. So I try to take complaints against moderators seriously. To see some examples of this work, take a look at my Meta Islam Stack Exchange answers.

The trouble with this particular complaint is that deleting comments that should be answers is a typical moderator activity. If you find such comments, just flag them as "no longer needed" and a moderator will take a look. It's not so supposed to be dramatic or controversial. As a result, I'm having a hard time seeing how this incident indicates the moderator is a terrible person.

Therefore, I recommend removing rather than adding ad hominem attacks.

Constructive criticism is when the aim is to improve the post. Exchange of comments when trying to make a point is more of a debate over a controversial point. You should have used chat instead.

I was trying to indirectly make a point by raising an issue which was related to what that person had just suggested in one of his comments.

Comments are not for making points, directly or indirectly; this is termed "debating", which the comments section in Islam SE is not the right place for.

But presumably the same belief is also shared by this so called moderator by the name @goldPsuedo.

Unless there is clear evidence that this is the view of the moderator, then your statement is speculation, which does not elevate to the level of proof. Allah says in Qur'an 53:28 that "assumption avails not against the truth at all."

Let me clarify whats going on here, the reality is that the point I was about to prove didn't inclined[sic] with the belief of this moderator and that's why he did not allow me to conclude something that is not well received by most of the religious fanatics, extremists, terrorists and fundamentalists.

Labeling someone, presumably because of a difference of opinion, as a fanatic, an extremist, a terrorist, etc., is not an appropriate behavior neither Islamically, nor from the "be nice" site policy. What I find interesting is that the previous accusation to the moderators allegedly called them liberals and not sticking to the proper Islam. I guess there is no way to please everyone, to the extent of being accused of both ends of the spectrum within the span of two weeks.

There are guidelines and rules for judging someone as a hypocrite. My strong advice to you is to exercise extreme caution prior to calling someone a hypocrite or a disbeliever unless you have sufficient knowledge of the topic and clear evidence that one is so. Even then, one should always seek excuses for his or her brothers. 'Umar ibn Al-Khattāb said:

Do not think of a word that comes out of your brother as bad when you can find a reason for it to be good.

If something reaches you about one of your brothers, then seek an excuse for him, and if you do not find any then say "Perhaps he has a reason [to do so]."

Not the answer you're looking for? Browse other questions tagged discussion site-policy .

2
How is the process of policy making for Islam.SE?
2
How to deal with a rude and aggressive moderator?
0
My answer has been deleted and I've edited it
1
Deleted answer on question "does changing clothes breaks wudu?"