What does the graduated site Philosophy.SE have that we don't?

TL;DR: All I could identify was:

Summary of what's below:

The obvious place to start looking is the rate of incoming questions, since the StackExchange staff said this is an effective rule of thumb. I will look at the number of questions per month which smooths the noisy data out a bit.

Summary: When Philosophy.SE launched, it had a comparable number of questions per month to Islam.SE. We currently exceed this rate. However, Philosophy.SE appears to be an exception to the rule.

Below I plot the number of questions in a given month (adapting a data explorer query), along with the 3-month moving average. I exclude both sites' first 4 months of existence as it skews the data too much. 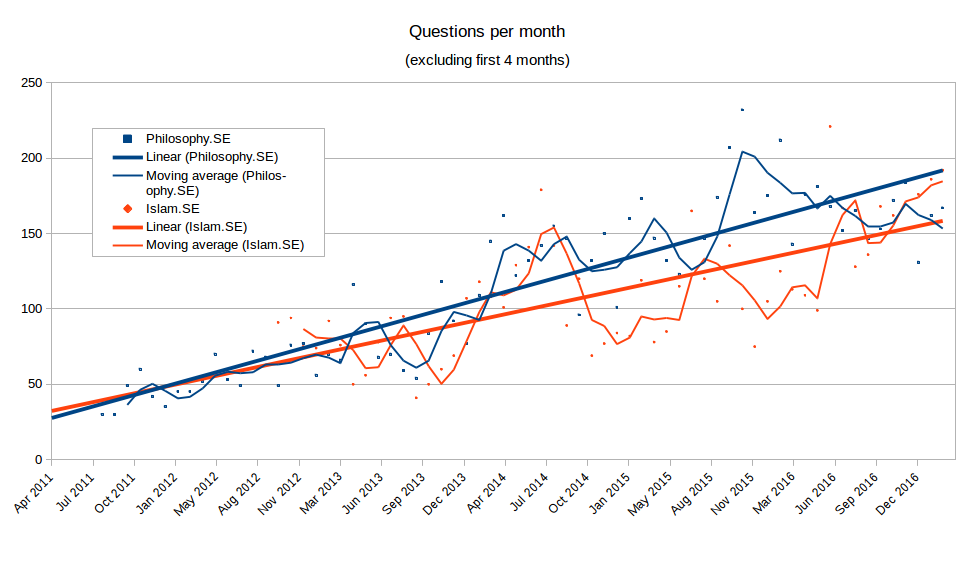 Other sites which were recently launched:

And also per-day question rates for other launched sites: 115.7 Stack Overflow (in Russian); 11.9 Raspberry Pi; 10.1 Emacs; 10.1 Worldbuilding; 6.9 Aviation; 10.3 Signal Processing; 7.9 Japanese Language. There's some exceptions, but mostly StackExchange live up to the claim of "10 questions per day" is a good indicator of when a site will be considered for launching.

Below I plot the number of posts in a month with score 1+, along with a linear regression and 3-month moving average (ignoring the first 4 months). 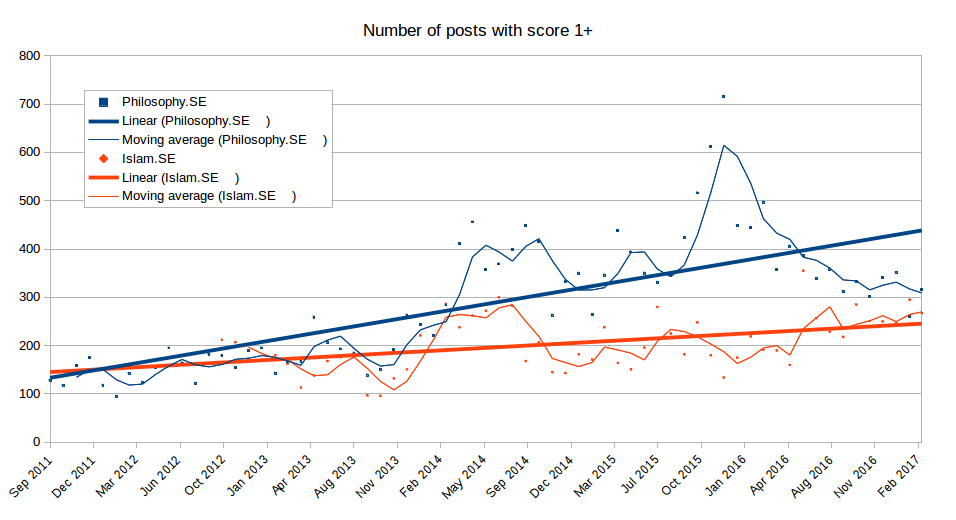 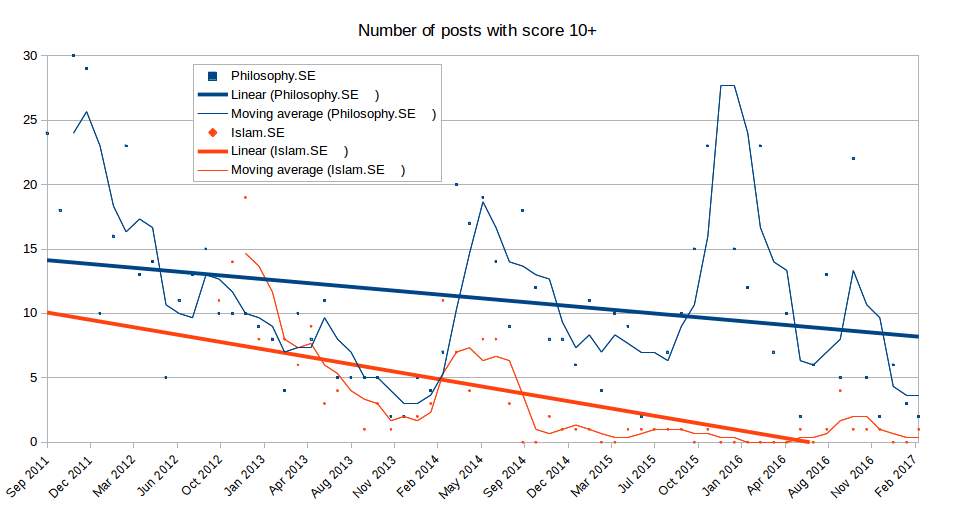 (These will appear to decrease over time since older questions have had more time to collect upvotes.)

I skip virmaior's answer to Writing and publishing a philosophical book without MA/PhD in Philosophy and no formal education which is community wiki.

Summary: I don't know if Islam.SE has experts or not; we seem to be generating some decent answers regardless. Philosophy.SE has some PhD students.

Professional philosophers on Philosophy SE indicates that Philosophy.SE has a few PhD students as their highest level of academic expertise. Presumably, they will go on to become experts, and hopefully contribute to the site.

I'm not sure if we're in the same situation, but there seems to be some users are consistently producing high-quality content: On top of the monthly users page are 1. Uma, 2. III-AK-III, 3. Medi1Saif. Some of the new/returning users are doing quite well too: Casanova, Zaid, Armaan have given decent answers to my questions, e.g., 1 2 3, so hopefully this is a sign of things to come.

Summary: Islam.SE is a long way ahead in terms of traffic.

Over the last year, weekly traffic looked like this:

Summary: Philosophy.SE has more active users than Islam.SE, but Islam.SE's number of active users is growing.

I use a data explorer query to gauge the per-week site activity over the last 150 weeks, and include a linear regression and 20-week moving average. (I'm not really sure how "active user" is defined). 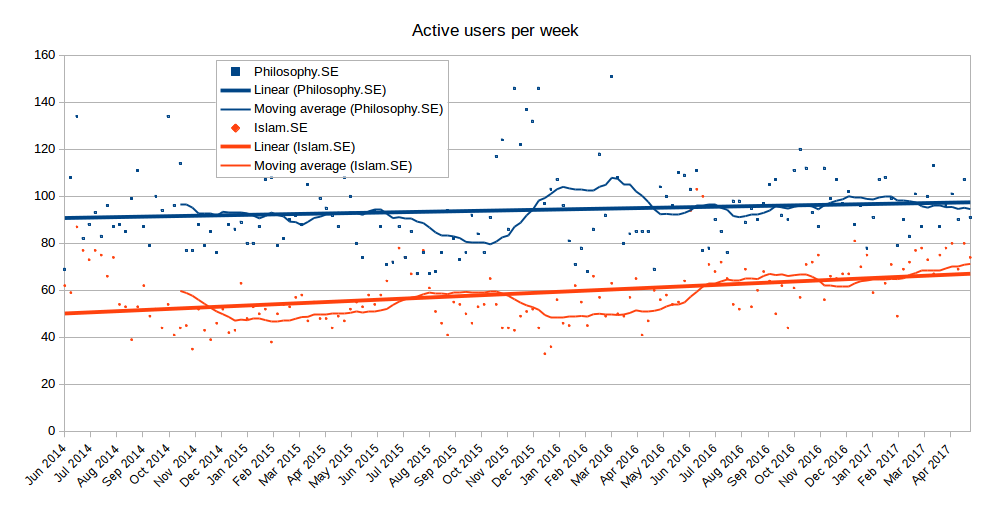 Review queue activity (where factor diff. is the number for Islam.SE vs. the number of Philosophy.SE) computing using a data explorer query:

And after restricting to 2017:

Using a data explorer query, the following plots the number of users with >= X reputation (where X is the value along the x-axis). Both axes are logarithmic.

And the same plot but with the religious StackExchange sites:

The following plots the per-week votes over the last 150 weeks (with a linear regression and 5-week moving average). 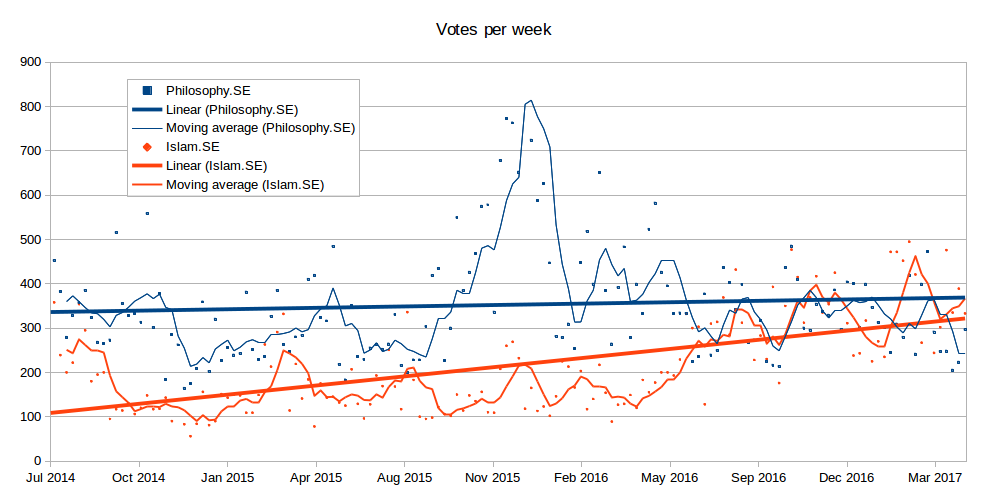 By adapting this data explorer query, we can calculate the proportion of all votes which are upvotes, which we plot below on a per-month basis, along with a 3-month moving average.

Summary: Our diamond moderators are performing a comparable number of actions to their Philosophy.SE counterparts. Assuming they would want to continue moderating after graduation (or we could find suitable replacements) we're probably fine.

After site graduation, would there be individuals who could [continue do] do this?

Currently we have the pro-tem moderators:

Summary: While Islam.SE isn't the best at self-moderation, neither is Philosophy.SE. It looks like their privilege thresholds are yet to be increased.

14
Moderator Pro Tempore Announcement
5
We need to vote more
4
Why does this SE site issue out more downvotes without comments than other ones?
6
The number of questions/answers and upvotes/downvotes per day
4
At what point will Islam.se grow out of the beta stage?
6
The increasing popularity of Islam.SE
5
Some obstacles to graduation: self-moderation, question inflow, upvotes, and experts
2
Are items from Jon Ericson's list from Jan 2016 still holding us back?
3
A sign of becoming a mature site: questions are being closed without diamond moderator intervention

5
Some obstacles to graduation: self-moderation, question inflow, upvotes, and experts
6
The number of questions/answers and upvotes/downvotes per day
6
The increasing popularity of Islam.SE
8
Steps to reduce the number of unanswered questions
2
Are items from Jon Ericson's list from Jan 2016 still holding us back?