The many alternatives to arguing in comments

Despite the comment page specifically saying "comments are not recommended for... secondary discussion or debating a controversial point; please use chat instead" and despite multiple meta posts warning against how arguing in comments significantly harms the site (ashes999, 2012; Aarthi, 2012; Jon Ericson ♦, 2014; Shog9 ♦, 2014; goldPseudo ♦, 2015), arguing in comments continues at Islam.SE.

This post is yet another plea to stop arguing in comments, but this time aimed to be more constructive than "don't do that".

Commenting on a question or answer

If you're uncertain (or even in disagreement) about a certain aspect of a post, ask about it as a question (and link to it). This has benefits on top of avoiding arguing in comments:

Alternative 2: Give a better answer.

If you disagree with an answer, why not give a better one?

If it's a poor question, downvote it, vote to close, and vote to delete. (Unanswered questions even get automatically deleted under certain conditions.)

If it's a poor answer, downvote it, and vote to delete, and upvote better posts.

This uses the site how it was designed to be used. It works!

Alternative 4: Let someone else help.

Is your criticism more about proving you are right or making someone look foolish than helping others improve their posts? Let someone else help.

Are you incapable of talking politely? Let someone else help.

Write [comments] as if you're writing a note to your boss at a new job. ... As humans, we tend to use the sarcastic and passive aggressive tones when talking to people who we feel are stupid or who are beneath us. While we might think our boss is dumb, in most cases, we're not going to talk down to him or her because we have too much to lose. -- jmort253, 2012

Alternative 5: Don't worry about it.

It is possible (and generally encouraged) to edit other users' questions and answers. Doing things like adding reliable references and fixing spelling/grammar errors are usually unproblematic.

It's generally good to edit questions in order to better highlight the question in the post, add/remove appropriate tags, and remove material which is not required to answer the question. I find it best to stick to minor, obvious edits when editing answers, because things can easily turn ugly otherwise.

Edits may be reverted, in which case it's best to leave it alone afterwards, in order to avoid an edit war.

There's no hurry. Why not wait until tomorrow, or even next week, before commenting? The author may even fix the problem themselves without being prompted. (E.g. a third party may give a meaningfully better answer, and the author might go "oops; oh well, I was just trying to help" and delete theirs.)

Alternative 8: Take it to chat.

When excessive comments are made, this prompt arises:

Please avoid extended discussions in comments. Would you like to automatically move this discussion to chat?

Chat is designed to offload the noisy comment chit chat.

Encourage users to join this site by e.g.:

In this way, over time, these new users will ask better questions and improve the community's collective knowledge. Over time, comment squabbles will become insignificant.

Show users how it's done by:

In short, by using the site how it's intended to be used.

Through upvoting (positive feedback), make users come to the realization: if I [add references] to my post, I get more upvotes.

Alternative 12: Take it to meta.

There's a range of reasons to raise a question here at meta:

We need an active meta, just like we need an active an active main site. Please keep it polite, as always. And if possible, it's better not to "name and shame" an individual (so the meta post have long-term value, rather than once-off usefulness).

Alternative 13: Become an Islamic scholar yourself.

This might seem far fetched at first, but e.g. on math.SE a lot of the users there were originally university students, PhD candidates, and the like, and over time they ended up becoming experts themselves. It can happen.

And give lots of incrementally better answers along the way!

If someone comments on your post, pause and think:

Let's not reward their misbehaviour. Ignore them. They thrive on wasting your time.

Alternative 2: Flag as rude or offensive; not constructive; too chatty

Flag the trolls, don't feed them Rather than arguing with a troublemaker (which only encourages them), just use the "flag" link to let mods know that a question/comment/answer requires their attention. This way the problem is dealt with, and the troublemaker's behavior isn't reinforced. -- HedgeMage, at meta.Christianity.SE

Are you responding to "save face" in response to a rude or patronising comment? Flag their comment instead.

If a comment is flagged by three users, it will be auto-soft-deleted. -- Jeff Atwood, 2009

StackExchange is designed to give the users of the site the power to self-moderate. Do it!

...moderators will now be able to view comments by a specific user that have been flagged. -- bluefeet ♦, 2016

The guidelines for what these flags actually mean are currently vague, but it looks like this is about to change. On meta.SE, Robert Cartaino ♦ considered unwelcoming comments as violating the Be Nice policy and worth flagging ("Typically it's just someone pandering to the crowd with off-putting quips like "Are you too lazy to read the manual?" ... sorry, but deleted."). Likewise, we have:

...rude or offensive comments should always be flagged. What you consider rude is subjective, but as a general rule if it is more likely to upset readers than it is to inform them, it qualifies. -- Shog9, 2014

Alternative 3: Take it to chat.

Alternative 4: Take it to meta.

There's probably more alternatives, which I haven't thought to list above. And if there are no reasonable alternatives... please keep the comments:

If the author responds to your (well-formed) criticism, please accept a difference of opinion and refrain from continuing (unless there is some meaningful benefit to the site; not just because someone on the internet is wrong [xkcd]). A third party can read the criticism and make up their own mind; a valid point doesn't need to be force-fed to others.

A meta.SE post How do comments work? gives details as to what comments are about on the StackExchange network.

What's so bad about arguing in comments?

StackExchange is a collection of question and answer sites; it's not a comment site:

This site is all about getting answers. It's not a discussion forum. There's no chit-chat. ... Use comments to ask for more information or clarify a question or answer. -- Islam.SE tour page

Maybe you see this as nothing more than a soapbox upon which you can stand, and anyone who chides you an enemy to be attacked. If so, then this is not the site for you - leave now, and don't come back. -- Shog9 ♦, 2014

The problem is that most online discourse reaches noise levels reminiscent of a group of friends at a spirited get-together. Stack Exchange specifically discourages that type of debate and on-going discussion. That is by design — but to understand why comments are so transient and expendable, you have to understand the core purpose of Stack Exchange's behavior. -- Robert Cartaino ♦, 2011, at meta.Christianity.SE

Comments have always been and probably will continue to be second-class citizens on the network. That is entirely by design ... The design of each site places primary focus on questions and answers. ... Asking the user to dig through a lengthy comment thread on the off chance that the information they're looking for is there goes completely counter to that mission. -- Adam Lear ♦, meta.SoftwareEngineering.com

And Islam.SE is no exception:

Comments, by design, are ephemeral; not only are they easier to delete than a full-fledged post, but also much more impossible to recover. The Comment Everywhere page, provided to all new users when they earn the privilege to comment, describes them as "temporary "Post-It" notes." And in a Meta.StackOverflow discussion on exactly this topic, Jeff Atwood (one of the founders of the Stack Exchange network) explicitly describes comments as "third-class citizens". -- goldPseudo ♦, 2012

Eliminating the noise and focusing on high-quality questions and answers has always been the StackExchange model.

The users who repeatedly argue in comments (thereby making the site unattractive to experts) curiously justify their comments by asserting they improve the quality of the site. 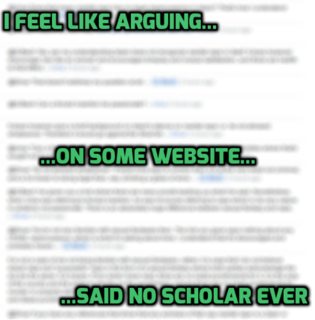 43
Why Sectarianism is Ruining Your Site
26
No Tolerance for Intolerance
8
Read this before declaring "it's not fair"
10
How do I write a good answer to a question?
12
How can we discourage users from using the site to preach Truth
21
Islam—Stack Exchange is not for debates or apologetics
2
should comment be deleted silently with no notify of the reason?
25
Take pride in your community, and work to build a site you can be proud of
2
More devotion of users
4
Debate questions, what should we do?
See more linked questions

5
Deleting unuseful comments!
1
When should a post on the main site be deleted?
2
How should we be handling users who refuse to respond to criticism?
1
Why there is so many negativity in this community?