The number of questions/answers and upvotes/downvotes per day 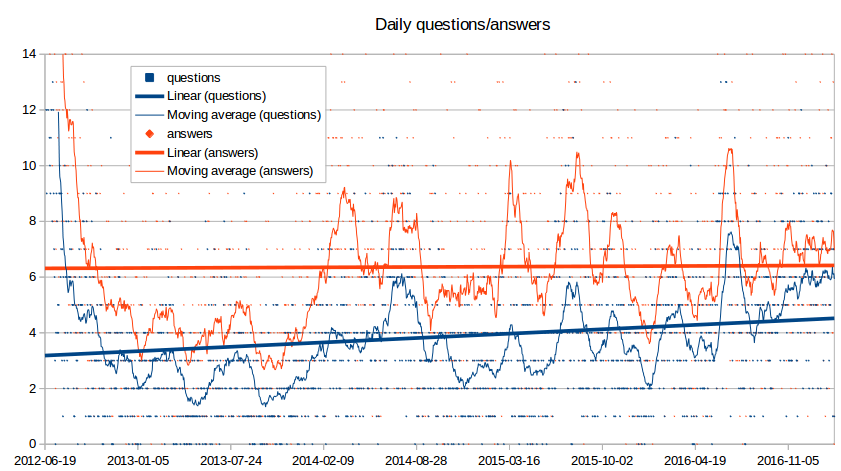 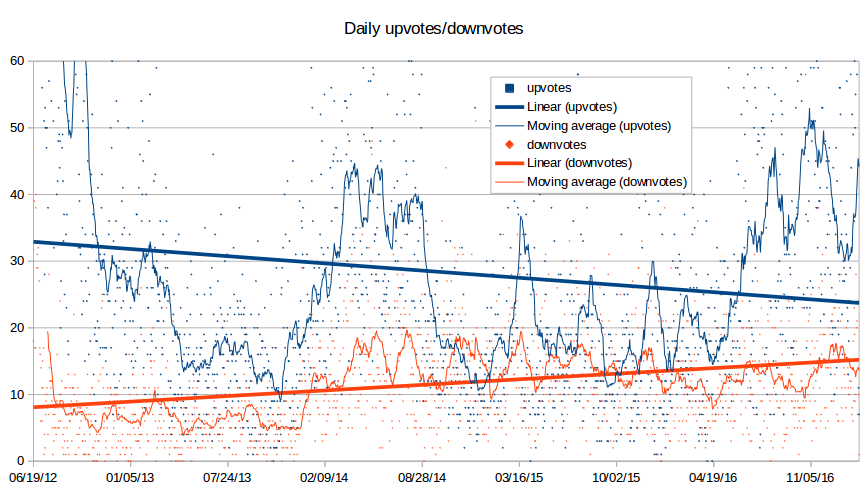 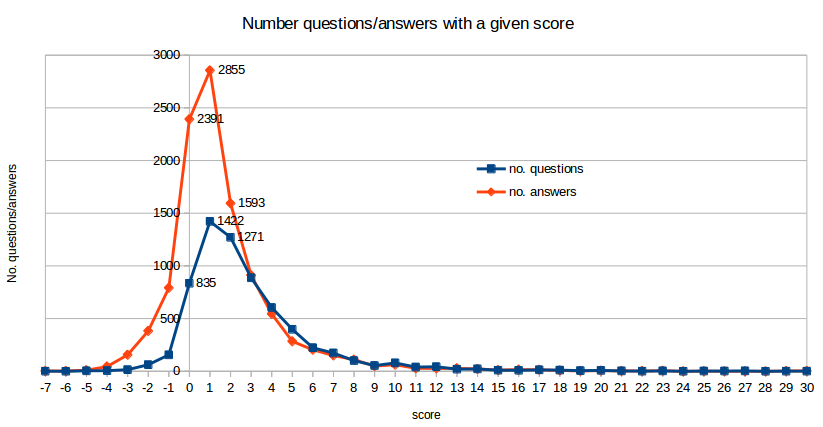 I include this as a reference post for the future, but I'll put some comments below:

Any other lessons to be learned?

You express concern about the increasing number of downvotes, particularly about the points where site-wide downvotes literally outnumbered the upvotes.

Back when that first turnover occurred, concern was exactly the opposite of what I felt: That was the first time in years that I felt the site was actually heading on the right track. Not that I think that lots of downvotes is good, or that having content that was attracting downvotes is particularly commendable, but the fact that, possibly for the first time since we got out of private beta, the aggregate voting actually reflected the quality of the site.

See, before then, we were receiving a lot of voting based on partisan lines; people upvoting content that they agreed with, not because it was particularly well-written, just because it was "right". A lot of that was blatant copy-paste, or shallow regurgitations of the same, or even just flat unsubstantiated assertions, often times written so poorly as to be barely intelligible. Basically, posts of questionable quality that just encouraged an echo-chamber effect.

Over the next year or so, even though we still hadn't really been attracting too many high-quality posts, the low-quality posts were also not being particularly encouraged; so far as graduation is concerned, this is a huge advantage over the earlier state of the site. And since the last year or so, when post quality had shown a marked improvement, the voting also reflects that.

As for your impression that users tend to dismiss downvotes because they're so common, that's not my impression at all. Downvotes are a form of criticism, and many users just aren't open to criticism at all when it concerns their deep-held religious beliefs. You can see with new users as well as established users — and it is hardly unique to Islam.SE — that a downvote is often taken as a direct attack on their Truth rather than, as intended, a community judgement on the usefulness (distinct from Truthfulness) of the post.

Counter-intuitively, rather than dismissing them as you suggest, many users likely take such downvotes, and even critical comments, as encouragement not to improve their behaviour and just keep doing what they've been doing, choosing to see it as an unfair attack on their Truth rather than heed whatever actual criticism was provided (see also the Backfire Effect).

It will show you the top writers for the Shia tag.

Now go into those topwriter profiles and you would see a majority of them are no longer active are have significantly reduced their dedication on to the site.

Some of their answers got deleted, not downvoted but deleted or some critical questions got closed. In addition we get more than average downvotes. Just look at my profile and other shia writers. (to see the downvotes, just click on the number of votes my answer has got). Though in return we the shias have also downvoted other answers as well. We're now in a bad cycle, both downvote without leaving a comment so no one would retaliate against us...I personally downvote the bad logic, regardless of the writer being Shia or Sunni.

Having that said the site is small, I mean it's not like all the Shias Sunnis on the site are bad, it's just that a very few would suffice in such a small site to make the site ineffective.

As a result many left and joined other social media sites[reddit, Quora, etc.] where there is less ability for someone to just simply delete answers.

So how can we improve?

The only thing I have to say is: We have to respect each other as brothers. After all we are all muslims, everyone (me the most should start from our own and build up)

Also from a very different angle:

The last 4 are also reasons that go against cultivating a good site. I think the reason is deeply rooted down in that our younger generations are not very knowledgable on their religion and don't care. They just come here ask 1-3 questions and go. If they continue to stay on the site THEN it gets better.

Yet they won't. I think the problem is in the Islamic culture. Something that we can't do much about on ISE. Perhaps that itself is good question. If you want you can write a question for: Are there any Islamic guidelines to make our youth engaged in Islam.

Just a recent example of why this site forum need's to change course to progress better.

All Shia supporting comments on this answer have been deleted, while the Shia-countering portion at the last paragraph of the answer is still there. I wonder if it's going to be deleted now.(I honestly think his answer and the comments should all be there to have a fruitful discussion, deleting comments or editing answers by moderators will shun users away)

(This is no reason for Shias being the right sect, only that this isn't fair game) 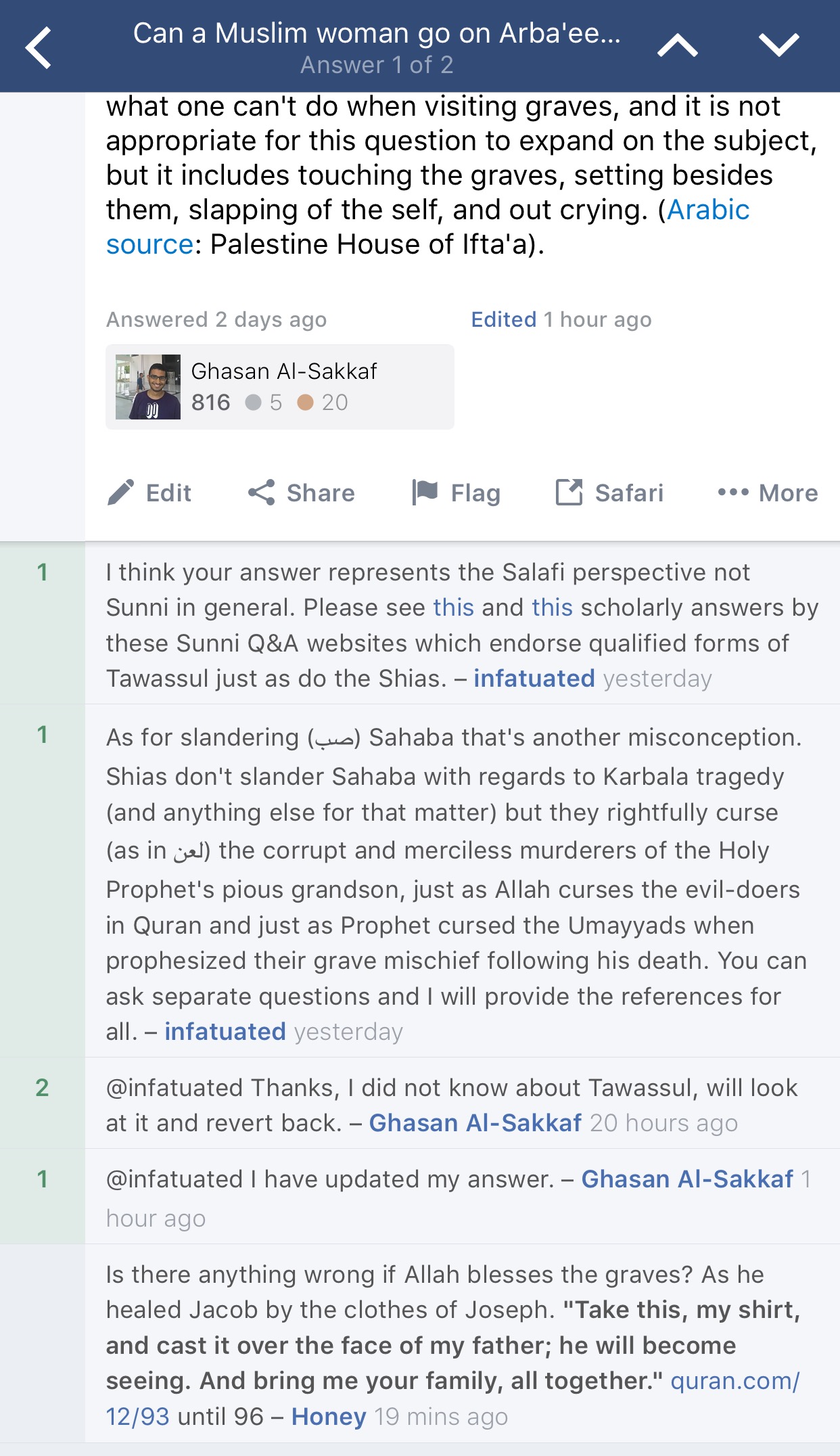 The person who answered the question wasn't offended at all, even as a result he asked this other question here

I believe that a down-vote is not enough to disprove/disagree of/with a question or an answer, each down-vote should ideally be followed up with some constructive feedback, perhaps we can include a new feature that does not cause a down-vote to be registered unless a comment is included, of course there must be a way in which the user is notified of this when they attempt to down-vote, this will help and change the attitude of members of the community and cause them to think twice and review their motive for the down-vote in the first place.

One thing that I realised as well, there are users which join the community, ask a single question and never visit the site again, some really good answers remained unmarked because of this.

44
Why Sectarianism is Ruining Your Site
10
How do I write a good answer to a question?
15
Issues with moderation
15
Disagreement should not be a basis for down-voting
17
Please vote based on quality
4
Why does this SE site issue out more downvotes without comments than other ones?
6
The increasing popularity of Islam.SE
2
Are items from Jon Ericson's list from Jan 2016 still holding us back?
4
Our upvoting patterns compare poorly to the other religion StackExchange sites; let's change this!
3
What does the graduated site Philosophy.SE have that we don't?
See more linked questions

5
Some obstacles to graduation: self-moderation, question inflow, upvotes, and experts
6
The increasing popularity of Islam.SE
8
Steps to reduce the number of unanswered questions
2
Are items from Jon Ericson's list from Jan 2016 still holding us back?