How should we tidy up the halal/haram family of tags?

When someone asks an "is X halal?" question, it is tagged with some almost-random subset of the following thirteen tags:

It's a mess! (And, yeah... I confess I'm guilty of contributing to this mess, in my questions and through retagging.)

Question: How should we tidy up the halal/haram family of tags?

Some obvious steps would be:

As for the less obvious...

If we generate a tag graph for the site, we can plot it as: 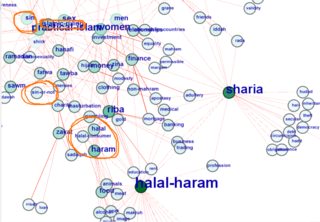 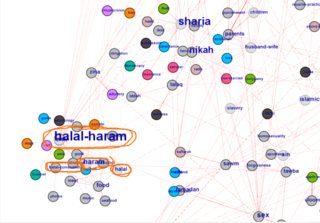 Nodes in these graphs are tags, and if two tags are closer together, they will tend to be more closely related. (I use two different algorithms.) What we see:

This issue was raised before, When to use haram and halal-haram tags?, where Bleeding Fingers♦ proposed:

halal-haram: shall be used for questions which are asking whether the stated is halal or haram.

halal and haram: shall be used in questions where the person knows that the stated is halal/haram, and want to know the reason of and/or the source of that rule/law.

I'm going to (respectfully) disagree with this. The problem I see is that it's unintuitive, so new users will learn to do this through trial-and-error. (I had no idea when I first joined.) It seems simpler just to have 'halal-haram' pop up as the tag suggestion whenever 'halal' or 'haram' is inputted.

I edited away the haram-halal tag. I don't think it will be missed.

Note that at the moment I'm not able to look at your chart due to a firewall, but basically I'd say IMHO halal, haram , halal-haram , haram-halal , halal-consumer should be summarized in one tag either halal-haram or haram-halal.
If we want to keep one of them, I'd prefer the first, as things are in first place halal as long as there's no evidence for the opposite!

This is because anything which isn't halal is automatically haram and vice versa this way one tag could resolve the issue and in case of doubt it is always good to use the halal-haram tag!

Now on the other hand shari'a says what is halal or haram, fiqh is the applied science for shari'a so maybe a distinction could be made between them, but is this the best solution?. Note that we also have a tag usol-al-fiqh which only applies for the sources each madhab or sect builds her interpretation of shari'a on. This is by definition a distinct tag.

Also a sin is something haram.

IMO adjectives such as lawful, permissible, forbidden etc. shouldn't be tags at all... I'm aware that this answer is no more actual, but I think this is an important point... ok strictly speaking halal حلال and haram حرام are adjectives but they have nouns in Arabic al-halal الحلال and al-haram الحرام ;).

So maybe a better, but maybe hard to establish choice is to summarize all the halal/haram tags in the fiqh tag because fiqh gives a qualification of what is halal or haram and is a noun.

Then one could discuss whether a tag shari'a is necssary.

I edited away the halal-consumer tag.

It may still be worthwhile creating a tag like consumption, buying, or shopping when discussing purchasing things. But most of the formerly tagged halal-consumer questions were "Is X halal?" when someone was considering buying something.

I edited away the sin-or-not tag. I encountered nothing I felt concerned about doing this.

I edited away the islamic-ruling tag. I mostly found "Is X halal?" questions phrased as "What is the Islamic ruling on X?"

I edited away the haram tag. We can use halal-haram instead.

I edited away the halal tag. It was mostly used as "Is X halal?" (where halal-haram can be used), with a handful of halal-certification questions thrown in.

7
Some micro-steps to improve tags (early 2017)
4
When to use haram and halal-haram tags?
4
How to decide which halal/haram tag(s) to use
4
Plan of attack for tidying the halal/haram family of tags
2
Some micro-steps to improve tags (mid 2017)
2
Compound tags: Do we need them?
0
Tags related to Halal-Haram should be merged
1
How do the other religion SE sites tag "Is X halal?" questions?
1
Let's not have an "Is X halal?" tag?

0
Tags related to Halal-Haram should be merged
2
Some micro-steps to improve tags (mid 2017)
3
Which questions should be tagged "sharia" and/or "fiqh"?