How to deal with a rude and aggressive moderator?

I have had a chat with one of the moderators (goldSeudo) in the main chatroom. He accused me of harassing him and finally said 'shut up'. He then deleted the whole conversation even though I request him not to delete it so that others can look at it. He deleted it anyways.

How to deal with a rude, bullying moderator who takes thing personnel and cannot take any criticism whatsoever. It has not really been the case with me. He has called other users that they are 'insulting him' (by 'questioning' his decisions). One has to talk to him with real respect otherwise he gets offended. Below is a snippet of the chat that I had with him. Please decide if I am wrong or he is wrong. If he is wrong, what can we do about such a moderator. Does he has a place on SE sites? 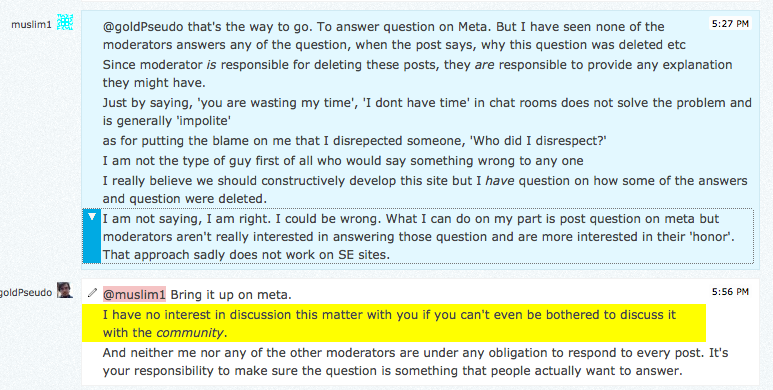 Please decide if I am wrong or he is wrong.

You are wrong for failing to take the issue to meta when goldPseudo told you to.

goldPseudo is wrong for continuing to interact with you after you failed to listen to him.

The moderators here are responsible for moderating chat as well, ensuring that the folks participating there have a place for constructive, informal discussion. If an issue arises that cannot and should not be handled in chat, it is imperative that they direct it elsewhere. If a gentle warning does not suffice for this purpose, they are expected to enforce constructive behavior, suspending obnoxious users from chat entirely if need-be.

So... muslim1: the next time a moderator tells you to take an issue to meta, take it to meta. Make your case, then drop it. It will be up to the community here to discuss the matter, and you will be expected to abide by their decision. Do not continue to harass moderators or anyone else in chat!

And goldPseudo: if you tell someone to take an issue to meta and they don't listen, kick them from the chatroom. If they return and continue baiting you, don't respond - if they still persist, suspend them from chat for a short time. If at the end of that time they still persist, suspend again for a longer period of time. And so on. Do not let a poisonous environment persist in chat once you have warned those involved to desist!

Simply you can not deal them directly. the best way is to bring it in meta and if mistreated or neglected or systematically discriminated then write a letter to SE managers.

Mods have power above you and this site has lot of unclear policies that mods can use them for justifying their actions. for example a mods quickly deletes any comment he personally dislike and leaves comments he likes. or a mod can delete or put on hold a post and find a problem for that post even if 90% of that post is high quality and when you resolve it throw you another minor problem which usually is ignored for most of other posts.

There are tones of policies around SE network that can be found by a mod to justify such actions. while policies of other SE sites are for themselves and for this site is only at level of advice. but they are enforced to this site because a mod wants this. although they are useful past knowledge and usable but still some of them are not applicable to this site because of Nature of Islam.

there is not clear set of laws. anyway I think some mods do not have enough politeness in this site and even have lack of it. I have heard the term " you are insulting me" many times when I have made a critique or advice to a mod without any insult in fact. they do not accept their mistakes and try to justify them. they react critiques very bad.

Some of sects are minority and treated as second class citizens. their posts in meta are simply ignored as if they are not part of this community. for example lets assume the topic X is on-topic in sect A and is off-topic in sect B. when a meta question is asked is X on topic. 90 of users say no it is not. it is bad for this site. and 10% say yes it is on topic in Islam (as a religion). but they are ignored. in this way this site will not result in knowing Islam.

lets use the literature of Sohaeb user. I'm sorry if this offended you, but truth should be said. I don't hate mods. But some actions of some mods are really annoying... I see some levels of dictatorship and discrimination and double standard about posts and comments of different sects in this site.

Being a moderator needs much energy and patience. But none of them justify treating others as you like. I think there will be no problem if the moderators kindly mention the reasons for editions, deletions and etc. I've faced similar problem with that Mod and I wonder why he treats this way. On the other hand I see that he is really trying to enhance the quality of this community.

finally, there's no reason for a Muslim moderator to use an insulting phrase such as "shut up".

I don't think they are being rude. Please don't be offended, but I think you and another user are really annoying. If I were one of the mods I would have banned you long time ago. However, Kudos to the mods for showing so much patience and tolerance not to mention how hard it is to mod a website like Islam.SE(Full of sectarian questions).

Ok, let us see why I or others find you annoying:

You have asked 7 questions on meta, 3 of these questions are complains and the mods respectfully responded to you. Not to mention the 2 other questions which were OK in my opinion (Note: Mods also responded to you) and the last 2 questions, you were accusing the mods. Wow!!

The thing which killed it for me is after all the answers you received from the mods you still went to the chat(multiple times) and started harassing the mods.

One of the mods kindly and respectfully asked you to bring it to Meta(which is the correct thing to do) but you kept ignoring his request while using the excuse (Mods stopped responding to me). As I said, It is clear they were responding. But the constant bugging and annoyance brought this on your self. Of course they would not respond you.

And don't even let me start with your comments and answers which is far more annoying...

PS: I'm sorry if this offended you, but truth should be said. I don't hate you. But you are actions are really annoying...

3
Too strict moderation by goldPseudo Moderator
8
Read this before declaring "it's not fair"
-2
How can we create a friendly environment on Islam.SE and deal with sectarianism?